RoachGuard– A Hybrid of Thermal and Synthetic Pest Control

RoachGuard uses the thermal mortality of the targeted species with a species specific synthetic residual to prevent re-infestation and is an exclusive Oakmont Environmental and BedBug Chasers® product.

We refer to RoachGuard as a “ONE & DONE” Roach Treatment to get your cockroach problem under control because there is simply no other method to kill, get rid of or knock down a greater percentage of the roach population on such a short period of time.

The advantages of RoachGuard over traditional cockroach treatments are numerous such as:

All living organisms (Insects, Mammals, Pathogens, and Bacteria) have a Thermal Mortality Threshold, meaning if you make it hot enough they will die even roaches. At Oakmont Commercial Environments we use proprietary ISO 9001 Certified heating equipment that has been validated over many years killing insects and pathogens. We heat the space or structure to a temperature that the targeted species cannot survive in – your space will be roach free! 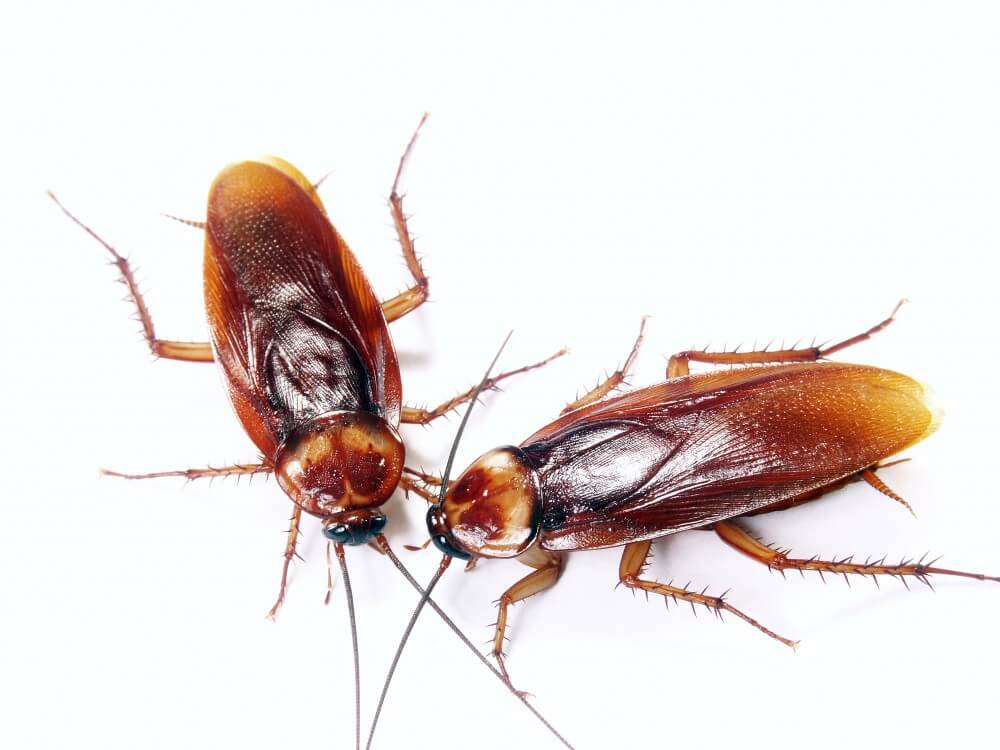 After we have conducted our systematic thermal roach genocide it’s time to Restore the Natural Order keeping insects and rodents outdoors again, where they belong to prevent a re-infestation. Adhering to strict Green IPM (Integrated Pest Management) principles is only one way Oakmont serves its Commercial and Business customers by using as few pesticides as possible.

Instead, we create Perimeter Barriers using lower impact synthetics like Gels and Active Baiting Technologies instead of just spraying pesticides. Once all the invaders are gone it is much easier to keep them out again with a solid IPM approach.

Using a blend of Thermal and Synthetic products to achieve a balance between Man, Insect and Rodent– some companies call that “Green”, we prefer to call that an Investment in All of Our Futures.

Common NJ Cockroaches That We Target

At Oakmont Commercial Environments our philosophy is simple; use 21st century technology today so our children and grandchildren can enjoy an environmentally safe tomorrow.

The largest of the species common to New Jersey. This species often becomes abundant in city dumps and is most common in the basements and steam tunnels of restaurants, bakeries, food-processing facilities, and grocery stores. When indoors, the nymphs and adults are usually found in dark, warm and moist areas of basements and crawl spaces, and in and around bathtubs, clothes hampers, floor drains, pipe chases, and sewers.

They are also common around the manholes of sewers, and on the undersides of metal covers over large sump pumps. In the north, this cockroach is often associated with steam heat tunnels. Where steam heat tunnels are not found, the American cockroach is restricted primarily to large institutional buildings. It has also been observed migrating from one building to another during warm months in the north. Occasionally, the cockroaches infest sanitary landfills and can survive Pennsylvania winters because of the warmth generated within the piles of trash.
American cockroaches feed on a variety of foods, with an apparent preference for decaying organic matter. The adults can survive two or three months without food but only about a month without water. American cockroaches feed upon a great variety of materials such as cheese, beer, leather, bakery products, starch in bookbindings, manuscripts, glue, hair, flakes of dried skin, dead animals, plant materials, soiled clothing, and glossy paper with starch sizing.

The most important aspect of cockroach damage derives from the insects’ habit of feeding and harboring in damp and unsanitary places such as sewers, garbage disposals, kitchens, bathrooms, and indoor storage indoors. Filth from these sources is spread by cockroaches to food supplies, food preparation surfaces, dishes, utensils, and other surfaces. Cockroaches contaminate far more food than they are able to eat. From various points in their bodies American cockroaches, and cockroaches in general, produce odorous secretions that can affect the flavor of various foods. When populations are high, these secretions may result in a characteristic odor in the general region of the infestation. Disease-producing organisms such as bacteria, protozoa, and viruses have been found in cockroach bodies.

Different forms of gastroenteritis (food poisoning, dysentery, diarrhea, etc.) appear to be the principal diseases transmitted by these cockroaches. These disease-causing organisms are carried on the legs and bodies of cockroaches, and are deposited on food and utensils as cockroaches forage. Cockroach excrement and cast skins also contain a number of allergens, to which many people exhibit allergic responses such as skin rashes, watery eyes, congestion of nasal passages, asthma, and sneezing.

A widely distributed urban pest; it is also the most common cockroach species in houses, apartments, restaurants, hotels, and other institutions. This is true not only in Pennsylvania but also throughout the United States and in most parts of the civilized world.

Adult German cockroaches are 1/2 to 5/8 inch long and tan to light brown (Fig. 1). Although they have fully developed wings, they do not fly. Nymphs are similar in appearance to adults except that they are smaller and lack wings. The German cockroach is best identified by its small size and by two dark parallel lines running from the back of the head to the wings. It is usually found in kitchens (near dishwashers, stoves, and sinks) and in bathrooms of homes.

German cockroaches usually prefer a moist environment with a relatively high degree of warmth. The insects are mostly scavengers and will feed on a wide variety of foods. They are especially fond of starches, sweets, grease, and meat products. In many locations, garbage is a principal food source.

As with other species, German cockroaches are mostly active at night, when they forage for food, water, and mates. During the day they hide in cracks and crevices and other dark sites that provide a warm and humid environment. Their relatively wide, flat bodies enable them to move in and out of cracks and narrow openings with ease. They may be seen during the daytime, particularly if a heavy population is present or if there is some other stress, such as a lack of food or water or an application of pesticides.

The German cockroach is the most successful of the species infesting buildings in New Jersey. There are several reasons for this cockroach’s persistence and the difficulty of controlling it. German cockroaches produce a larger number of eggs per capsule and they undergo the shortest time from hatching until sexual maturity, resulting in a rapid population growth. A greater number of nymphs hatch successfully because the female carries the egg capsule during the entire time the embryos are developing within the eggs.

Also, and most importantly, German cockroaches are smaller than most other cockroaches and can conceal themselves in many places inaccessible to individuals of the larger species.

Prefer warm and dry locations, such as near refrigerator motor housings, on the upper walls of cabinets, and inside pantries, closets, dressers, and furniture in general. They can also be found behind picture frames and beneath tables and chairs, and inside clocks, radios, light switch plates, door frames, and dressers.

The brownbanded cockroach feeds on a wide variety of materials. Like members of other cockroach species, it may consume materials like glue or paste (especially from animal-based materials), starch, and certain color dyes. As a result, items like stamps, envelopes, bindings of older books, draperies, and occasionally wallpapers may show signs of feeding.

This species has also been known to chew on nonfood materials, such as nylon stockings, presumably for the residues of body oils and skin flakes. Damage by brownbanded cockroaches results from their feeding and harboring in pantries and storage areas indoors. Also, bacteria and protozoa that cause diseases (such as different forms of gastroenteritis and diarrhea) can be carried on the legs and bodies of cockroaches and deposited on food, utensils, etc.

Oriental cockroaches are often called water bugs because of their preference for dark, damp, and cool areas such as those under sinks and washing machines, and in damp basements. This species, which is less wary and more sluggish than the others, of concern because it often travels through sewer pipes and lives on filth. They are found with decaying organic matter indoors and out. Indoors,

Oriental cockroaches prefer dark, moist areas such as under porches, sewers, drains, crawl spaces, dark, damp basements, and floor drains. They can be found outdoors in abandoned cisterns and water valve pits; in yards; beneath leaves; in bark mulch around shrubs, flowers, and foundations; in dumps, stone walls, and crawl spaces; and in garbage and trash dumps and trash chutes. Both nymphs and adults are sluggish and are usually situated at or below ground level indoors.

They are seldom found on walls, in high cupboards, or in the upper floors of buildings. At times large numbers occur in one great mass around leaks in the basement or crawl space areas of homes. Oriental cockroaches are generally found outdoors during warm weather, but in periods of drought there may be considerable movement into structures, apparently in search of higher humidity. They may enter the home in food packages and laundry, or merely come in under the door or through air ducts, garbage chutes, or ventilators.

Oriental cockroaches feed on all kinds of filth, rubbish, and other decaying organic matter. They seem especially fond of garbage and the contents of discarded tin cans. If water is available, they can live for a month without food; without water they die within two weeks. The most important aspect of cockroach damage derives from their habit of feeding and harboring in damp and unsanitary places such as sewers, garbage disposals, kitchens, bathrooms, and indoor storage areas. Filth from these sources is spread by cockroaches to food supplies, food preparation surfaces, dishes, utensils, and other surfaces. Cockroaches contaminate far more food than they are able to eat.

Cockroaches in general produce odorous secretions from various points in their bodies. Such secretions can affect the flavors of various foods. When cockroach populations are high, these secretions may result in a characteristic odor in the general region of the infestation. Disease-producing organisms such as bacteria, protozoa, and viruses have been found in their bodies.

Different forms of gastroenteritis (food poisoning, dysentery, diarrhea, etc.) appear to be the principal diseases transmitted by Oriental cockroaches. The insects carry these disease-causing organisms on their legs and bodies and deposit the organisms on food and utensils as they forage. Cockroach excrement and cast skins also contain a number of allergens, to which many people exhibit allergic responses such as skin rashes, watery eyes, congestion of nasal passages, asthma, and sneezing.